Alright, my blog is starting to look like an actual blog that someone cares about. It's been far below freezing this entire winter, so I took what little disposable income I had saved up and sank it into a laptop and some software because I KNEW I was gonna be broke and freezing cold the entire month of January and would need to occupy myself while staying warm by my space heater. I've been dicking around with photoshop, learning some (very) rudimentary tricks as well as figuring out what to do to make this blog function a little more proper. 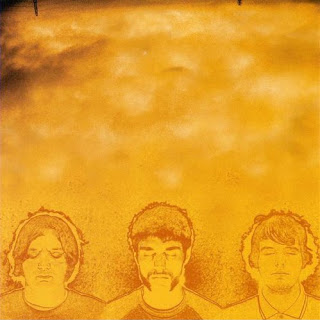 This album makes me happy. Really happy. There are very few bands in existence today that can apply such a scope of colors to one album using only guitar, bass, vocals and drums. To find a fair comparison to this album, one would have to stretch back a few decades and even then you would not find a good match. Pearls And Brass quietly dropped this album and (for me) flew right past heavy fuzz resurgents like Guitar Hero dandies Priestess and stoner pop princes Queens Of The Stone Age to craft an album much more precious than their vastly more popular contemporaries.

In a perfect world, P&B's output will be remembered with some small reverence not too unlike the early Groundhogs catalog, or Gary Moore's Skid Row. I would be unfair to compare this album to the first Captain Beyond album, but I think of the two as kin in my head because of the acoustic interludes countered against proggy fuzz attack. CB's interludes are more in the classic prog catagory, whereas P&B's lie closer in with doomy modal blues like Robert Johnson and wierdo acid folk like First Utterance from Comus. This album got REALLY popular around here because one of the independent record stores jumped on it and sold something like 60 copies of it within a month because they wore the grooves out playing it in the store. Just about everyone that walked through the door for a year got treated to hearing that album, and just about everybody that walked through the door, if they enjoyed the sound of an electric guitar at all had a good reason to buy it.

Pearls And Brass had it all; acoustic slide jams, early Grand Funk Railroad fuzz guitar attack, well thought out riffs that never ended and sometimes never repeated, vocal hooks galore, and the occasional stomping Sabbath doom-out. They were incessantly sold out and ordering more copies. When Pearls And Brass toured, our dumb city may have been one of the better markets for them to play. I opened for them twice and the shows were both nicely attended (and my bands shows were RARELY nicely attended.) We were out on a weekend roadtrip at one point, had a night off and saw that P&B were playing a bar we were familiar with and went and it was a GHOST TOWN. Had the band all to ourselves. At that point, live, they were already shirking off alot of the first albums material and they were playing the far more manic material off their upcoming second album "The Indian Tower", which is great, but I think all the songs sounded the same, though the lone acoustic track BLEW AWAY the three acoustic tracks on the first album. After they broke up, Randy Huth, the guitarist and vocalist did an acoustic solo album called Randall Of Nazareth. His style of writing and playing is captivating and singular. It would be worth your while to track it down (it's on Drag City I think, so it can't be too hard to get ahold of) if you like any of the acoustic moments on this album.

This recording is natural sounding and highly representative of what one would hear at the show. No processed vocals or 15 layers of guitars or triggered drums. Just good solid playing. I considered these guys the top of the heap of the fuzz resurgence, dusting more popular bands like Priestess and Dead Meadow (but not Dungen, who can do no wrong). After releasing the second album, P&B did their few tours and went on indefinite hiatus. Thankfully, these recordings will never go on hiatus. This is one of my favorite albums of all time, despite the ugly cover artwork. Hell, it's not like I can do any better.

"my bleeding hands, tearing up the ground"
Posted by nothingwheel at 5:03 PM