Best thing I have seen so far this year. 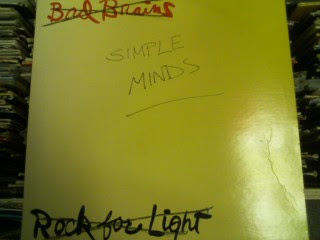 I couldn't believe this when I saw it at the record store. Shane, my friend who works at the store just gave it to me because I found it so ridiculous. It was in the dollar bin. Someone had to have had a sense of humor when they did this. Pardon the crappy camera phone pic. The vinyl inside is the Simple Minds album from 1979 "Life In A Day."

Reminds me of that Liars EP where they used the Einsturzende Neubauten artwork, but scribbled over it. Comedy gold right there people.
Posted by nothingwheel at 1:22 AM No comments:

Coolest thing I have heard so far this year:

I'm not uploading this album because it just came out a few months ago. The way I see it, music is music and if it is out there, listen to it. If it is available, buy it. There is nothing worse than a chump that has a a fat Ipod and like 22 CD's that they only still own because they couldn't get more than a few cents for them on amazon. I downloaded this a week ago from Ongakubaka after someone got me hip to it and found it at the record store today so I PURCHASED IT like a good little consumer. Death were a three piece from Detroit in the 70's. You can find their bio all over the net, and plenty of download links I am sure. This is a record that was shelved in 1974 because they were doing it for a big label who wanted them to change their name. Death took a hike and the tapes were shelved until February 2009. So I'll add my insignificant freight car to the hype train. I am going to gush about this one to anyone who will listen. Short of a few quieter bits, this record is raging and feral from beginning to end in true 1970's Detroit/Creem Magazine style. Hearing this for the first time brings back hearing Search & Destroy for the first time at age 18, thinking I knew it all and realizing that I still didn't know shit. I have never been a very big punk fan. The Sex Pistols were overrated and Black Flag sucked more than they were good. All the 'proto punk' stuff gets my blood going though. This album belongs in the same pantheon with The Sonics, The Stooges, The MC5 and The Monks like all the critics are saying and are going to say in the coming months. Expect to hear a piece on these guys on NPR at some point.

What's a big drag is that everyone is going to make a big deal about these guys being black and playing hard rock in the 70's. That's a bullshit reason to talk about these recordings. That's about as lame and sorry as saying "She's a great drummer for a GIRL" or something nearly as bogus. What's remarkable about this mini-album (26 minutes!) is that the SONGS are remarkable. Excellent songwriting, propellant, energetic playing, interesting arrangements. The reason to talk about these recordings and this band is that this is some harsh shit! Whether it was MEANT to be this harsh as a final product is not to be known. Columbia would have liked to have polished this up to a high shine and it would have been about as hairy and scary as any Tony Orlando & Dawn album by the time they were done with it. Major labels always have been, and continue to be the scourge of music. Sadly, the members of the band missed their shot at the brass ring, but had the album been polished and released, would it be seen as such a special thing now? Would it be as raw and amazing sounding? Would the label have watered down what they did, or fuzzed it up and made them into heavy metal 'also-rans'? Or would the label have done what they tried to do with everything back then and tried to make it into disco or something to try and market it to the 'niche' they doubtlessly would have tried to market it to based on skin color? The upshot is, these guys were righteous and stuck to their guns and what happened happened and now we all have the bounty of discovering this, the musical equivalent of finding a $20 bill left in the dryer at the laundromat.

Thank you Drag City for unearthing this undeniable gem. Thank you to the Hackney brothers for not just sitting on these tapes, dragging them out for show and tell every couple of years for family members who may or may not give a damn (I know my family doesn't care much about all the dumb albums I have recorded) I know I have given a damn at least a few times a day for the past 2 weeks or so. I wish they would have finished a few more tracks before getting on Clive Davis's shitlist. This is still the best 26 minutes of music released so far in 2009, I just wish it were more like 40 some-odd minutes.

Visit Death's official blog here, then buy the album online, or at your local independent record store with all due haste.
Posted by nothingwheel at 1:32 AM 1 comment: