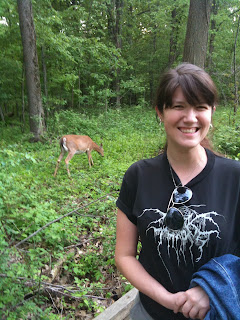 I love this girl and I am marrying her next week. I don't get personal on the internet anymore, but this is a pretty major event and I might as well crow about it a little bit. She doesn't like her picture on the internet, but she'll get over it. This is my fiance.  She's wearing my old Darkthrone shirt. She stole it. I had to buy another so I could properly rep.  I don't think she is particularly fond of them, but she doesn't mind them like some of the crap I have played around her. The newer stuff is pretty acceptable in the car, as long as it isn't all blast beats. She's not into blast beats. She calls me Bunny.  We got an apartment together last August and we've been sweating bullets to pay for it because it is in an upscale suburban area that is 12 miles closer to the University she is attending. I've been working 2 jobs to make ends meet, but it's pretty nice to not have to hear gunfire throughout the night or worry about my car.  I make some money during the week as a proofreader in an office about 2 miles from here. I'd like to turn that someday into a freelance skill and actually do it for actual book publishers, but that's a pretty difficult field to crack.  It almost feels like a hobby. I'm sick for actually enjoying it I guess. When I was in high school, I had a hobby too. It was playing bass guitar. Now it's my weekend job and it's nearly no fun at all anymore. I never practice. I never touch a bass unless I am playing a professional gig. It's really sad and if my 13 year old self could see my 34 year old self, I would kick me in the balls and call me a fag and a poser. I won't make the distinction about which me is calling the names or who is getting kicked, because it could probably go both ways.  I haven't matured much.  Derogatory language and testicles are pretty much par for the course at any age.  I do still like the gig though.  I get to play music and keep my technique tight without obsessing over things.  I get to play all kinds of different styles.  I get to eat thousand dollar wedding cake every weekend. I'm not in a bar full of trashy people or drugs or having to listen to modern radio hip hop when we are on break.  There is usually coffee on hand, good coffee too.  It certainly has it's perks, but at the end of the day, it's still a wedding and I am wearing a tie and dress shoes.  People hire us so they can point at our song list and go "play that" and "play this" and "learn this terrible Toby Keith song because I love it and I'm horrible!"  We get asked if we play the electric slide at nearly every event. Like...live.  We get asked if we do any rap.  We get asked if we could do that 4 Non Blondes song and Sheryl Crow even though we are all dudes.  We get asked to play things that people don't even know the name of, the artist or even know the tune.  We get to the hall before the servers show up for work.  We get to leave well after they have all gone home. We roll in our own sound system, our own lighting rig and prepare a laser light show and we make that special day THAT much more special.

Next Saturday though, in the spray of Niagara Falls, the tables will be turned. The special day will be MINE.  The hunter will become the hunted (or whatever I'm trying to say.)  My fiance will take my unfortunate last name as her own and we'll swear some sort of eternal cosmic oath to one another and there will be flying babies playing trumpets and fawns dancing in a meadow made of cupcakes and Lawrence Welk bubble machines and stuff.  The wedding guests will slowly filter over to the reception hall where we have hired Darkthrone to play the reception.  Yeah, you heard that right.  No lie.  Fenriz and Ted are flying over to play their only show EVER since 1990 and it's going to be for my fucking wedding.  I love her that much that I make the impossible possible.  Move heaven and earth?  Fuck that, I got Darkthrone to play my wedding reception.  What's grandma gonna think?  Fuck her.  She can think "En Vind Av Sorg" for all I care.  You wanna do the cupid fucking shuffle?  Fuck you too.  You can dance it to "Summer Of The Diabolical Holocaust" just fine. This is a wedding singer's revenge for all the stupid fucking dreck I have had to learn, play or suffer through in the 4 years I've been doing it.  They're going to pull that corny "surprise move" and have a "special guest" join them onstage too... and it's gonna be the groom... ME!  I'm gonna play guest cowbell on "In The Shadow Of The Horns" and yell NOCTURNO CULTO! real loud right before Nocturno Culto starts singing. I'm really gonna yuck it up too, in exaggerated comic reference to the Saturday Night Live skit.  I'll be really drunk and inconsiderate at that point, and will likely fall over onto Ted's microphone stand and it may chip his tooth.  People kept asking me "Did you hire your own band to play your reception?" and I've been pretty evasive about answering that question.  Well, the answer is no.  I hired a band alright, but it's the most important band in the world since the Grateful Dead.  It's fucking Darkthrone and they will bring the house down with 2 decades of True Norwegian Black Metal.  I've even asked them to play some of the later "punk" stuff and their 2nd set will be a cover to cover performance of "Transylvanian Hunger."  I figure since it's all in one tempo, people will just assume it's disco. I had to tell the parents and grandparents that "They're like a cross between the Everly Brothers and the Average White Band."  They bit.  If anyone's curious, Nocturno Culto chose the prime rib option and Fenriz ordered the salmon for dinner.

I digress.  It's been a very good year.  My girl and I have both grown by leaps and bounds over the past 2 years and this couldn't come a moment too soon. I am still astounded that someone puts up with me and all my dumb CD's, guitar junk and endless blathering about obscure funk or death metal.  If you could all see the state I keep "The Mancave" in, you would know it could only mean love.  I have little faith in the concept of  "the soulmate."  I think there are alot of people in the world and it's all by accident of birth or circumstance to whom we are born to, who we meet throughout life and who works best together.  She and I just happened across the best combination in each other and marriage is such an insignificant step in the whole process of life.  We've been married for so long at this point, it's just a formality to us... a rather expensive formality.  We've both gotten into and out of and back into the spirit of things a few times.  I'm just happy to get it taken care of and I am happy that everyone is happy about it.  I'm happy she hasn't killed me.  I'm happy her cats like me.  I'm happy my band hasn't fired me for being an insufferable stress maniac for the past 3 months.  I'm happy about all the wonderful developments in the past few years for me.  I'm happy my father and I get along and almost understand one another.  I'm happy to get to Buffalo and get to meet my newborn niece for the first time.  I'm happy my entire family will be at my wedding.  I'm happy my fiance's family is actually making the drive as well (we live 5 hours from Buffalo, they live at least 7 hours.) I'm happy all this stuff is working out that I never assumed in my wildest dreams would ever work out for my hopeless clown ass.

...All except that Darkthrone bit, but a boy can wish can't he? 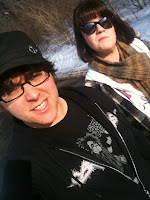 Posted by nothingwheel at 5:19 AM

This makes me soooo happy to see! You are such an awesome guy and she is your match! And that is awesome that a band you both love is playing your wedding. I dunno if Ryan Adams would play my wedding one day. Cheers to you both and lots of love!

Best blog post of the year.
I kind of think Darkthrone playing is a lie, but I know better. I just want to know how much money they want, if that's not a dick question.

Incredible. I am so happy for you both! the wedding sounds pretty much exactly like what your wedding SHOULD be. drop me a line w/ your address for a wedding gift and lemme know if you're reg'd anywhere.

much, much love -
jeremy

Your fiance is taking your name . . . so now she will have YOUR SISTER'S NAME!!! Okay, I gave that name up seven years ago and it is not currently in use by any living relative. looking forward to seeing you next week.

If you need a fly girl at the wedding, I'll be there with sequin tube top in Tow. Just FYI.