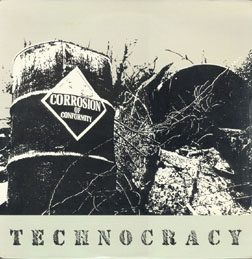 I'll make no secret that I am a huge fan of the metal/hardcore crossover years during the mid-80's. Nothing from that era tops this EP though.  Plenty has been said or written about how the mixture of metal and hardcore was the death of hardcore, I like to think of it as a logical continuation of two bloodlines that were so close to one another, it was inevitable.  It's all metal to me anyways.  Listen to an AC/DC record at 78 and it's basically D-Beat.  The Cro-Mags jacked Iron Maiden riffs... and neither punk nor skin nor hessian alike can deny the influence of Motörhead.  Before there were blogs or MP3's or streaming audio, your only chance to hear something new was to trade tapes.  I was hoodwinked in a shady deal one night by a scurrilous ne'er-do-well and lost my copy of the new FULL LENGTH album from Testament called "Souls Of Black" for this CASSETTE EP that repeated on both sides of the tape. Was I ever a dumb kid.  Unwise in the ways of commerce and bartering.  I mean... Souls Of Black was a slick new full length and they had a video on MTV!  What was I thinking?  Since it happened though, I could care less about Testament. 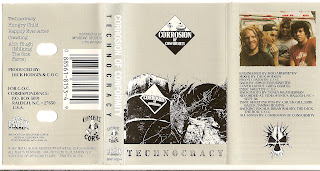 Technocracy was a funny sounding recording where the singer couldn't even keep up with the band cuz there were so many words. I was completely floored by the sense of urgency and the mania of it all. I learned this album on bass inside and out and can still play all 13 minutes of it to this day, all the fills and everything.  Mike Dean is one of my favorite bass players of all time and I am super excited that the three piece lineup is touring the early material again. Who knows how long it will last though before Pepper Keenan decides it's time for him to rejoin the band (ugh) and they continue down that sorry fucking path. Of their early "hardcore" years, this was the apex of their powers.  I totally lost interest when they went 'alterna-southern metal' but it was cool to see those same playful young lads shown goofing outside their van on back cover getting some very big recognition.  (I WILL go to bat for "America's Volume Dealer" being a totally underrated album.)  I still have this cassette and for some reason I can't remember, I scanned the cassette cover at one time and still had the jpg on my hard drive.  I took these tracks from the out-of-print remastered CD that came out several years ago.  I didn't include the bonus "demo" versions of the songs because they were not included on the original release and for some reason, I was just not into the lack of continuity.  I'm usually really into all the extra crap that makes its way onto reissued records, but there is an immediacy to the original 5 tracks that I still find totally intriguing to this day.  The tone of this record is completely singular.  Nothing can be added to it or taken from it, but I sure wish they wrote more stuff like this, or there were other bands that wrote this stuff.  It's brutal hardcore punk one minute, then it's Sabbath/Celtic Frost heavy the next minute, then there's a Skynyrd-meets-Greg Ginn guitar solo that you can't tell if it's in tune or not.  I still think the recording is one of the coolest sounding records ever.

The hungry child worships... no more
Posted by nothingwheel at 2:16 AM