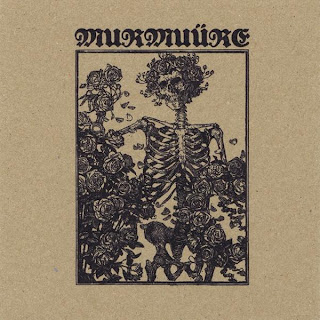 Wow, this is shockingly refreshing. I have no idea where I ran across this, because it was several weeks ago and it has been sitting in my ipod for awhile.  I finally checked it out expecting either some kind of harsh black metal basement recording or maybe a lost Grateful Dead bootleg as the cover might suggest. I really don't know what to write about it other than it's awesome.

I'll spare you the indignity of re-reading what the Aquarius Records guys had to say about it.  For once, they were right on though.  This is a fantastic little labor of love on the part of an anonymous auteur  He does not identify himself, but he does not keep himself hidden either as there is a blogspot and a website for this project.  This lone 2009 release has been in print twice both as a cassette and a CD and is about to be in print again on vinyl.  I just discovered it recently and it's a stunner.  Somewhere along the way, it got classified as black metal, but it really isn't.  It's more along the dark industrial soundscape path, but it's no "dark ambient" snooze either. There is an evident black metal influence, but it's really only through the sparse guitar work which was sourced from a single improvisation that was recorded in 2006.  Beyond that, it's just dark music.

I am an avid appreciator of stuff like Einsturzende Neubaten, Throbbing Gristle and early Laibach, but it's not really stuff I can get into on a regular basis.  I enjoy the adventurousness of it, but it rarely comes off as "successful" to me.  I guess I just don't get it.  I'm not ashamed, I just think it goes nowhere and people who really think they understand where guys like that are coming from are just assholes, especially if you were born after 1988.  Music like this is not made to connect with an audience, it's there for the benefit of catharsis for the artist.  This seems to be successful, at what, I am not sure.  There is a sense of satisfaction I get listening to it that I just don't get from many other "sound collage" type artists.  I still don't understand it, but I don't have to, I'm just lucky enough to get to enjoy it.

There is a musicality to this project, unlike any of the comparisons that have been thrown at it.  The closest musical cousin I can find to it would be early COIL or This Heat, only without vocals.  It's a pastiche of dark sounds that work in collusion together to make some of the most gripping music I have heard in a very long time.  In total, it's 28 minutes of music and it will probably be the first, last and only thing that Murmuüre ever releases because it took so much for him to complete it. I would not begrudge him that. If this is the only recorded legacy of this project, at least it's brilliant. I would begrudge him, however, if this was never to be released again aside from on the extremely limited run releases.  Hopefully it has a long life through the internet.

Murmuüre may be an anonymous project, but it's far from hidden.  The album can be downloaded from the bandcamp page and you can provide a donation for what you think it is worth. I found a download link and will be making a donation in kind at some point myself simply because this isn't some faceless record I am only going to listen to once.

listen and download it here, and don't be a dick about it.
Posted by nothingwheel at 4:15 AM