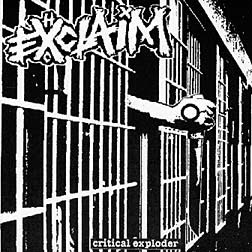 What a kick in the head this album was. Some friends of mine had an extra seat in the car to go see Hellnation back in 2001 (I guess, or at least that is what the Youtube footage of the show says) It doesn't seem to me like it was that long ago, but I guess it was. I had never heard them, but I knew they were a well known name in the power violence/grindcore world and that was good enough for me. They were playing with some Japanese hardcore band too. I didn't know much about Japanese hardcore past seeing the name S.O.B. bandied about in metal magazines in the early 90's because every grind band ever named them as an influence and Dan Lilker wore their T shirts. I figured it would be good shit. I didn't know nothing. Hellnation was totally underwhelming. Sloppy, muddy, one dimensional. Kinda boring really. I spent most of their set digging through distro and spending too goddamned much money. The Japanese guys hit the stage on Hellnation's equipment and proceeded to DESTROY. They weren't necessarily tight, they just sorta hacked away at their guitars, shrieked alot and played the drums super fast. It was just total energy blitzkrieg. I bought this CD and a T shirt and the blitzkrieg continued once I put the album in. This album is the sound of punk chewing it's fingernails off. It's red eyed cocaine anxiety terrorizing a preteen sleepover. This album is the hardcore equivalent of a bandsaw locking up on a piece of sheet metal.

I don't think they even heard each other or cared if they were playing the same song. The crowd tried going apeshit a couple of times, but in grand Midwestern style, did nothing really. Blank stares, jaws agape. Any time a pit was started, it was ignored until it went away. We rustbelters are masters at choking a pit out. Exclaim was underwhelmed with us it seemed. The lead singer pointed at people and said stuff about them to the other band members that made them laugh. We didn't understand what he was saying. It didn't matter really. We deserved to be called whatever he was calling us for being lame. However I have influenced your thoughts, dear reader, I guarantee they have not prepared you for what this album ACTUALLY sounds like. It came out on Sound Pollution, and they are going tits up, so this isn't something you will find anytime soon. This album doesn't seem to have much of a blog presence and that is a shame. I think when it came out, it was a bit of a curiosity. It's shrieking feedback, completely overdriven sound and almost total lack of clarity probably perplexed most. I'm sure it influenced some of the rawer HC bands operating today like Coke Bust and Sex Vid (I know it influenced Disconnected an awful lot). This is fast, noisy and harsh. Comedically harsh. Harsh to an extreme that only power electronics practitioners like Masami Akita and Wolf Eyes take it. Confuse fans take note. This might even be of some interest to some of the Aquarius Records cassette only black metal set due to it's absurdly and intentionally raw nature.

"more scream, high energy"
Posted by nothingwheel at 4:07 AM

brilliant record! I'd love to see EXCLAIM live but not that many bands from Japan make it to Europe.