Bloodpact - As Good As Dead 7" 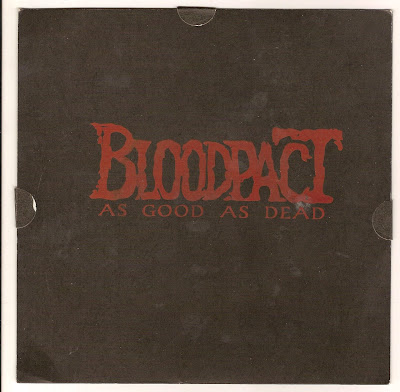 I've been looking forward to posting this for a LONG time. This release is why I am doing a blog right now. A year ago I got an ipod and started dumping my music into Itunes. Being the super nerd that I am, I liked to take the discography CDs I have and separate the tracks into the separate releases. I have since decided that this behavior is needlessly annoying and will soon be reconsolidating my OUTO discography, among others, back into single folders. When I put Bloodpact's (a)bastardization compilation into my itunes, I couldn't find coverscans ANYWHERE and realized that one of my favorite bands was TOTALLY unrepresented within the blogs. This was a crime I had every plan of remedying, once I figured out how too. Thusly, after some trial and error, here it is.

I caught Bloodpact at a number of shows and I don't remember being too into it at the time. I was way more into Catharsis and assorted other 'sounds' than the fast stuff back then. Andy's other band, Ruination was much more interesting to me, as were lots of other bands that today I deem far inferior to this release, which I slept on for some years after it's release. I think at the Exclaim show I went to, I bought the (a)bastardization CD in Andy's distro on a whim. It was cheap, I had just been paid and I spend like a pasha at shows if I have the money. Whenever I got around to listening to it, the first 6 songs kicked me in the balls like very little hardcore ever has.

This is my favorite hardcore release of all time. When I saw that it had so little representation on the internet, I actually vowed then and there that I would start a blog at some point to get this record heard, by maybe 8 more people, but heard nonetheless. This record is the reason for the season. Will335 named his band As Good As Dead in honor of this release, and though they are VERY good at what they do, they are a pale shadow compared to the ferocity of this record. This EP is one of the most vicious hardcore platters ever released. Bloodpact were wound tighter than a cheap watch and they were PISSED. Andy's vocals are some of the most focused and intense I have heard since I first heard "Tied Down" from Negative Approach. He has is own trademark rasp that is only marginally related to John Brannon's voice in that they are both yelling. The lyrics I found to be truly remarkable. I am a sucker for some good, well informed social injustice whistleblowing, but tired slogans have never found much of a place in my heart. Bloodpact delivered message lyrics in an odd sort of stream-of-consciousness prose style that didn't question anyone's intelligence, but still made room for hooks and the occasional oddball rhyme scheme without succumbing to repetitive mantra-like gang choruses. Not a tuff guy beat down rhymed couplet to be found, and no fingerpointing or "stabbed in the back" bullshit.

Another gush-worthy point of this record is the drum performance of Dustin Schoenhoefer, who offered his services for some shows and the recording to get the project off the ground. He later rejoined and recorded the final Bloodpact material, which I have never heard. Dustin was playing in Next2Nothing at the time, and went on to be a founding member of Premonitions Of War (where he seriously tore shit up). He plays in Walls Of Jericho now. I'll reserve comment, but I'm glad he's making money and all that. His drum performance on this recording can only be described as unique and propellant. I won't go any further than to say to pay attention to the drums your second or third time through listening to it.

Andy's new band is called Nightbringer, and they are one of my absolute favorite bands right now. Very much more Motorhead/JapHC influenced than Bloodpact, who, though exceedingly fast, were far more thrash metal. I implore you to follow their exploits here or suffer your fate bereft of their influence on your pathetic life.

I ripped these from my copy of (a)bastardization. If you want the scratchy vinyl pops and stuff, tough titty. Go track down the vinyl you snob. In the meantime, enjoy hearing the songs on any format you wish to transfer these to. The original 1999 7" release was only 6 songs. 2 more songs were recorded for compilations. One is a 7 Seconds cover. I put them in too because they were all the same recording session. I borrowed Will's copy of the 7" for the scans I included. This has never been repressed, so even if you have a copy, yours wouldn't look much better, so no bitching about the spot of mold on the front. I think there were only 100 of the red vinyl pressed. 10 were packaged in ammunition cases or something ridiculous like that and a couple hundred came out on regular black vinyl I would imagine. My scanner isn't big enough to accomodate the entire insert at one time, so I had to scan the inside in 2 parts and cobble them together in photoshop. I hope no one can see my splice.

give it up, you suckers
Posted by nothingwheel at 3:27 AM

Thanks for this- I love me some good, genuinely pissed vocals (as opposed to the overdone bull necked tough guy grunting stuff).