Death Side - The Will Never Die 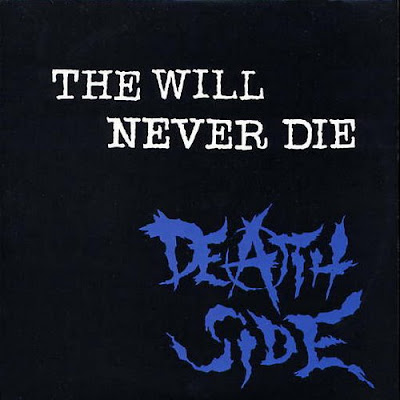 I had never heard the name Death Side before a year ago. I will admit it. I am a Johnny-come-lately to the world of 80's Japanese HC. If I remember correctly, I got in a conversation with someone about Zeke and how they incorporated sick guitar leads into already hyper-charged punk rock. This particular someone knows alot about hardcore and they pointed me at Death Side and their penchant for incorporating almost POWER METAL guitar melodies and solos into raw-as-hell/fast-as-fuck punk rock. This got me sliding into the world of Japanese hardcore punk. Once I scratched the surface, I dug in a little deeper and found alot of cool stuff. Outo, Lip Cream, and S.O.B. alongside Death Side are now absolute favorite bands of mine. Death Side basically started a little known sub-sub-sub catagory of hardcore punk known as 'Burning Spirit' hardcore, characterized by the combination said NWOBHM guitar heroics and a taste for all things Discharge. I have checked out some other 'Burning Spirit' bands and they really don't do a whole lot for me. Sometimes descending a little too far into their own cliche's for my taste. Deathside had it right. Even some of the bands that formed out of Deathside's ashes leave me cold. It's sort of how Tragedy and From Ashes Rise came out in the late 90's and then all these "Epic Hardcore" bands popped up in their wake and just smothered it.

Japan in the 80's was pretty well isolated from what was going on in the rest of the punk rock world. There was no internet, so news travelled slow and import records were subject to all kinds of tariffs and customs taxes. If an album was not licensed in your country, you had to pay top dollar to get it. Japan couldn't get alot of punk from the rest of the world, so they made their own, and the rest of the world be damned. Death Side obviously did things the way they wanted too. Had an American hardcore band at the time tried some of the stuff that Death Side did, they would have been called out on it in a second. Twin guitar leads? Epic solos? That kinda stuff didn't happen in the US, UK or Europe without some shit hitting some fan somewhere. Death Side broke up in the early 90's and splintered into Paintbox, Forward and Judgement. They and a few dozen other bands picked up the Burning Spirit banner and held it and it holds to this day. Sadly, Chelsea, guitarist for Death Side passed away in August of 2007 of apparent complications caused from heat stroke (or so says the internet.) Very few Japanese bands released anything outside of Japan, and kids like me were left to only see the words on the page in the Relapse catalog with prohibitive price tags placed next to them. That's why the internet is so cool. I'm able to find out if something is ACTUALLY WORTH the money people are charging for it.

I went to a punk show a few weeks ago and someone was selling this in their distro. I paid $30 for it. It's not available outside of Japan. I knew it was worth it because I had already heard it. It's the 2CD version with all their EP's and compilation tracks collected. I just did a cursory check on Ebay JUST TO SEE what this goes for and I couldn't find this particular release. I did however find the original vinyl 7" listed twice. One jerk in Japan is listing it with an opening of $80.00. He has like 25 other listings of original vinyls of Outo, Lip Cream, The Comes and a bunch of other rare records listed for equally ludicrous prices. (up to $120!) The sad part is, there is a whole pool of schmucks that are all gonna pay that and more.

What the fuck? Is it Antique Roadshow? Are you all old ladies who collect Hummel figurines and Beanie Babies? That kindof punk rock vampirism makes me sick. I hate the fact that people like to lord it over each other's heads that they have THIS record or THAT record and then have to compare pressings and colored vinyl and stuff. On one level, collecting is fun and I have a healthy CD collection myself. When it gets to a certain point though, I really do feel that it cheapens the music. I'll see someone creaming about something on some forum and I'll find a download link just to see if it's all that and it just SUCKS. It's cool that it came packaged in a ziploc bag filled with sour milk though. I see people buying albums not because they want to hear them, but because they will be able to flip them in a few years for an outrageous amount of money. HOW PUNK. Does it have anything to do with the music anymore? I have a few neat items that I have picked up over the years that I would not like to part with. Most of them are not worth much, but I don't care because I am not going to sell them. I see more and more people caring more about the FORMAT or the item itself than the music. I am hardly what I would consider a 'punk', but I know it is not punk to be paying $200 for some raggedy ass flexi-disc, and fuck you very much for showing it off on some faceless forum. You got jerked, kid. No punk rock is worth that much. Go spend that on a guitar and MAKE your own punk band for cheaper, or press a 7" for your friends band if you have that much loot to throw around.

Merchandise... It keeps us in line.

Edit: A friend of mine has mentioned to me that he has had problems downloading the second disc (sadly, the better of the two, it being later material and just better developed in general) I had problems with another upload this week. (rough mixes of the new Disconnected material, not for public consumption) If anyone else is having trouble, let me know in the comments. I log into this thing a few times a week even if I only post something once a week or so.
Posted by nothingwheel at 1:40 AM

links are dead. if it's possible to re-upload, it would be very much appreciated.