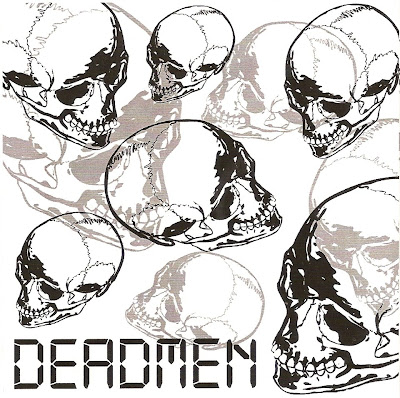 I'll put the quickness on this one just to get it out there. Out of something like 12 bands that I saw last weekend out with Disconnected, Deadmen probably impressed everyone in the van most. The laundry list of current and ex members of bands the members of Deadmen have occupied seats in is long. Seriously, it's worse than Dimmu Borgir's biography. Coffinworm (one of my favorite bands of the moment right now), Lair Of The Minotaur, Demiricous, Angelville, Suicide Note... Some creative googling/wiki-ing even turned up a stint in Birthright by one of the members. You can do your own creative googling if you really want to connect the dots. This demo does not do any justice to what they come off like live. Opening song "Been There Still There" opens with a shameless bite of "Snakes Of Christ" from Danzig, but when the drums come back, it gets driven into the dirt with an EYEHATEGOD/Crowbar groove. Nate's vocals are pure acid. It's obvious the members of Deadmen know their way around writing a good song and have done it many times as they adeptly engineer the song through pacier double kick parts and a few twists and turns, right back into another 2 ton groove. Both the other two songs, "Whiskey Vs. Wine" and "These Gods Have No Eyes" open with horns-down ramming speed Venom-like abandon while going forward to dismantle and reconstruct further sludge, NWOBHM and Celtic Frost reference points, even a few tastefully under-used twin guitar volleys for spice.

The Deadmen demo is regretfully short, and the songs are constructed in such a manner that compel the listener to follow it through to the end. None of them take very long to say what they need to say and a full length of anything more than 35 or 36 minutes is probably all that will be needed to make a properly devestating debut, should they choose to move forward in that direction. This band needs to be felt live though. This is a great start, but after seeing them live, the demo is merely a souveneir to tide me over to the next time I get to see them. Indianapolis has always had a mid sized, but potent and well developed metal/punk scene that has never really gotten it's fair due. Carl and Garrett have a monster here as well as in the mighty Coffinworm. I should be so lucky to be in ONE band this good before I die. Spread this one far and wide.
Posted by nothingwheel at 4:34 PM

Track 3 in the upload is corrupted on extract. Mind reposting it?

weird. yeah, I'll get on that as soon as I get back to my hard drive.