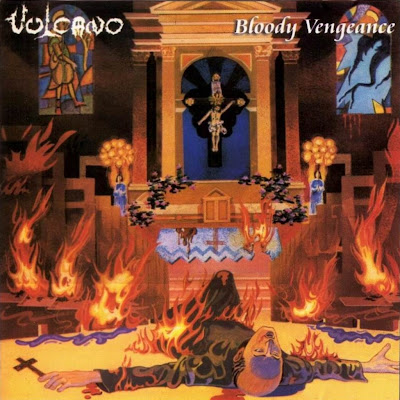 Happy 25th of December. If you are celebrating something, good for you. If not, I hope you find something to do. I don't have to work today, and everyone I know is doing their thing, so I'm blogging for a change. I went to work on my entry for top ten of 2009, but Vulcano's 1986 masterpiece Bloody Vengeance was playing on my stereo and I couldn't adjust my focus to anything released in 2009. Following my muse:

The 'bestial' thrash of 80's Brazil sounds like they got ONE shipment of metal LP's in 1986 and no instructions for operation. There were copies of the first Bathory album, Obsessed By Cruelty, Pleasure To Kill, Apocalyptic Raids, Welcome To Hell, Dealing With It, Fuckin' Death and Infernal Overkill. Maybe some copies of Hear Nothing See Nothing Say Nothing. The cardinal rule of "When one guy plays fast, everybody else play JUST AS FAST" was completely ignored in music class, as was tuning or the concept of tempered notes at all. Brazil was too pissed to be worried about any of that silly shit. They just HAD to spew forth profane blasphemies in broken English, and they had to do it faster amd meaner than Pleasure To Kill. The oft-blogged-about "Ultimate Bestial Thrash Album" of all time is obviously INRI from Sarcofago, and for good reason. It's nasty. It's REALLY nasty and amazing and amateurish it foresaw just about everything taking place 25 years later with frightening accuracy. Vulcano was nastier. The production was nastier, the lyrics were nastier, the cover makes Exhorder's Slaugher In The Vatican (which was banned in the US for some years) look downright pious. It's a 23 minute long "full length" with 7 proper songs that carelessly and drunkenly careen towards the old nun hobbling across the street with a carriage full of crippled orphan babies. The 7th track is one of those awesome satanic demon ritual chant interludes (or Brazilian kids playing with vocal filters and effects in the studio) and the final title track is the closest they have to a slow jam on the entire album. Bloody Vengeance probably ISN'T as blasphemous as INRI, but I think it sounds a good bit more evil. INRI is almost cartoonish in it's over-the-top hatred of Jesus and all that is good and holy. Venom never sang "Fuck you, Fuck you, Fuck you Jesus Christ!!!!" Morbid Visions was the warning. INRI was the shock and awe campaign... Bloody Vengeance was the full-on attack. BV was much more direct in it's delivery. There is no "Nightmare" to choke the pace after 3 songs. BV does not relent until the last song, where the tempo slacks a bit and some groove comes out for a scant few minutes before the album is over. It's pretty poorly sequenced actually. The first six songs are blistering and one dimensional. They jump the rails immediately and don't allow you to regain your composure for their 19 minute duration. If there was any more of it, the songs would run together as they all have the same raging tempo and rhythm. They may have no rival in intensity from this decade. Maybe Revenge or Deiphago. I would not hesitate to say that it is one of the most violent albums released in the 80's, Brazilian or otherwise. I ripped this from the 2009 Cogumelo reissue with a DVD live show from 1985 I found a few weeks ago in Columbus. It sounds like it has been remastered, but alot of the noise issues inherent in even the best 320kbps vinyl rips I downloaded are still gladly there, and it is NO cleaner, maybe just a little louder.

I bought Beneath The Remains in 1990. I was probably 13. It was kindof a revelation to me that there was such an active scene in South America. I saw "The Emerald Forest" and it wasn't metal. I figured most of South America had never even worn a proper pair of pants or had ever been in air conditioning. It seemed dense, hot, sweaty and humid. It probably still is. It's probably as gross as I could ever imagine it being to try and play intensely fast death metal in an equatorial nation. There are probably giant bugs that bite people, and drug murders occurring every few minutes just outside the rehearsal room in the kind of neighborhoods I would have come from were I birthed to some family down there. I can only imagine that these conditions are what they fed on to make the music as sick as was coming out of the region in 1985-86. I will tell you what I know for a fact though, I PORED over every thanks list from every tape I bought from 1989 to 1992 and got familiar with an awful lot of names of bands that I only ever got to read about back then. Sepultura and Ratos De Porao was all we got from Brazil up here, and aside from thanking each other and a number of Florida death metal bands I already knew, there were bands who got Portuguese shout out's and a number of names that were not familiar. Chakal, Sex Trash, Overdose and Vulcano come to mind immediately. Sarcofago may have gotten some love, but I don't know since Sepultura didn't reprint their thanks lists in the reissues they put out a few years ago (dicks.) Those names were the real deal.

Hundreds of bands currently go to great lengths to make sure their albums sounds are cloaked in bestial mush and filthy fairy dust to try and get that early 80's mystery that made Venom's Welcome To Hell such a punch to the gut when it came out. Never mind that it was a total pisstake. In my own youthful naivete, I was convinced that Welcome To Hell contained codes and secrets in its murk. I thought it was WILLFULLY recorded like that to mask and disguise the keys to Satan's own kingdom, only available to true Venom fans who were hip and got the decoder rings at a gig or something. Some heads in Norway had the decoder ring in the early 90's and kicked up some hellish dust. Cats in mid 80's Brazil never got the decoder ring. Satan knew they couldn't afford to get to see Venom if they ever made it down there, so he hooked them up personally. They went straight for THEE DUST and snorted deep, straight from the baggie. I'm convinced of this.

click that shit and breathe deep.
Posted by nothingwheel at 5:48 PM