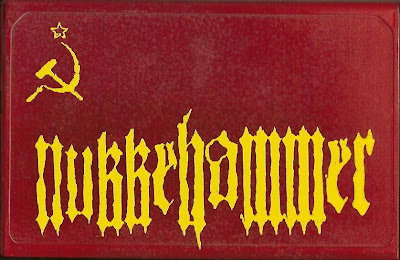 I've been a pretty bad mood for the past couple of days. Let's hear it for negativity. I've got it in spades right now.

In honor of said negative vibes, I present all with one of the most negative sounding recordings ever. Nukkehammer's demo cassette was released recently in a run of about 7 copies or something. Oddly enough (and this never happens, because I don't care enough to pay attention to shit) I got onboard early and actually got a copy of the first run. The Sacrosanct Opuscule was responsible for the amazing packaging job, and it was a doozy. Sprayed and screened case (pictured). Printed cassette, obi strip. Very fancy. It's a work of art. There is a second run as well, for info on that, hit the TSO link.

Nukkehammer are crusty, heavy, noisy and brutal. Perfect shitty mood music. They have a song called "Warheads For Coke" What more description do you need? It's punk crusted metal I would say, and the recording is murky as all hell with lots of feedback and hell going on. Fucking inspirational is what I call it. What inspires an even shittier mood than I am already in is the fact that I have to miss their show in 2 Saturdays because I am booked and most likely will not be able to see their set. Pisser.
Posted by nothingwheel at 1:01 AM

unfortunately the 2nd run doesn't have the same amazing packaging that the 1st run had but it still comes with cool artwork!

b.t.w. wouldn't have thought that this disgusting kind of piss called RedBull is even known in the U.S.!