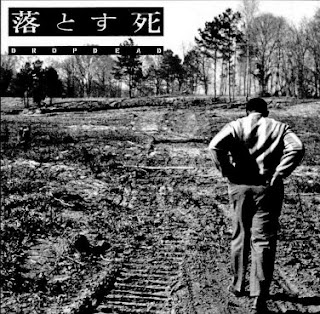 Dear Internet;  seriously?  You're this "great source of all information, true or otherwise." You are the gossip column of the world and this great source of new music for people.  Especially punk kids who don't want to pay for music.  There is an awful lot of that stuff out there and yet I find THIS fast/grind/powerviolence/punk/hardcore whatever-the-fuck-it's-called-this-week example of perfection to be totally underrepresented. (seriously scenesters, decide on a name, then kindly fuck off and take a shower.  It's been around since 1985 and it's called grind, I don't care what they are singing about or what Eric Wood feels about it.)

For some reason, I was searching this and noticed that there were a few download links to it, but for the most part, they were like 128kbps.  I have an original Selfish Records version of the CD that I bought from Media Play of all places in 1994 when I was in high school.  Here is a fairly high quality rip of it (200 or higher kbps)  This is another one of those albums that changed my life.  Up there with  Black Sabbath - Master Of Reality, Naked City - Torture Garden, or Obituary - Cause Of Death.  This is the first time I had ever heard anyone being REALLY pissed about vivisection or factory farming.  Bob's vocals are probably the most pissed ever recorded.  Unlike alot of guys, DROPDEAD doesn't make it sound like it's a job, they rage from the heart no matter how fast they are playing (though it is usually fast).  The songs usually have some kind of structure and thought to their assembly rather than much of this stuff that comes out now and somehow, Dropdead are able to keep it kinda catchy too.  When I first heard this, I considered it kin to Terrorizer and I still do.  This is punk played by guys with metal skills and smart-missile precision like only dudes could do in 1992 (i.e. before there was a roadmap on how to play and record this kindof stuff.)  Dropdead helped to distill and refine the definition of pissed for me.  This is also the first CD issue of it, so there is no remastering or studio fuckery going on with the recording, so you will have to turn it up if you are used to listening to corporate embarrassments like Phobia or y'know, Disturbed?

I post this specifically in honor of In Disgust, whose demise I lamented in my most recent post.  I considered them kin as well. Dropdead are still out there killing it on occasion. As a bonus, I've uploaded both the original Selfish records version and the Armageddon version that I happened across at the store the other day.  The Armageddon Records version is a different earlier mix and is separated only by 2 tracks, one being the A side and the other being the B side.  The mix to my ears is absolutely more feral, but it's one of those "Raw Power" kindof arguments.  I know the original flawed mixes and like them better, but that's just me.
Posted by nothingwheel at 1:52 PM

In Disgust did a split LP with Pretty Little Flower. Haven't heard it yet but I'm probably buying it soon.

It's pretty tuff. I haven't listened to the PLF side yet, but the IxDx side is good.